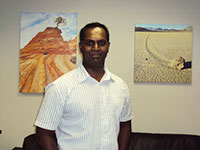 Sundras is registered as a Geotechnical Professional (Pr.Sci.Nat.) with the South African Council for Natural Scientific Professions (SACNASP) and is affiliated to various professional societies and organisations.

His past formal working experience of approximately 13 years includes working as a Mine Geologist for Goldfields (Pty) Ltd in Welkom, Free State and as an Engineering Geologist for several geotechnical and structural/civil engineering consultancy firms in Durban, KwaZulu-Natal. 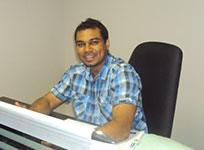 Yusuf Hansa studied at the University of KwaZulu-Natal (Westville campus) during the years 2007 to 2012 and holds Bachelor of Science (BSc) and Honours degrees in Geology.  Yusuf’s past formal working experience includes working as an Engineering Geologist for Moore Spence Jones, which saw him involved in several environmental remediation and industrial/commercial projects in South Africa and Malawi.

Yusuf has been involved with SGE from the company’s inception and has proven to be an invaluable asset thus far.  He has taken a keen interest in the geological interpretation of study areas and is especially adept at conducting investigations for low cost housing and bulk water supply schemes. 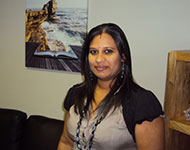 Keshini Govender’s geotechnical experience includes working for soils/materials laboratories for approximately 8 years (2005 – 2012), during which time she was primarily involved in the calculation and processing of tests results.  She joined SGE in March 2013 and has been solely responsible for data capturing and draughting of project site plans.

Her computer skills are above average and she is proficient in Microsoft Office and several other work specific software packages, including DoTPlot, WinDCP, Rubicon DCP and AutoCad.  Keshini ensures that the day to day administrative duties of the business are kept up to date and takes pride in organising/setting up of geotechnical fieldwork and reports. 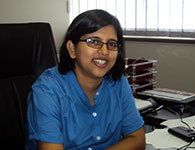 Harshda Chagan studied at the University of KwaZulu-Natal (Westville campus) during the years 1993 to 1997 and holds Bachelor of Science (BSc) and Honours degrees in Statistics.

Her past formal employment experience includes working as a Survey Statistician, Assistant Regional Survey Manager and a Quality Assuror for Statistics South Africa.  In addition, she has also worked as a Data Analyst for ABSA’s Direct Marketing Unit as well as a Statistician/Report Writer for Private Health Administrators.

Harshda is proficient in data capturing, statistical analysis and interpretation, quality assurance and project management.  She has attended several specialised courses (such as an Advanced Excel and Personal Development Skills) and is currently responsible for updating statistical trends, Human Resources and accounting/bookkeeping duties at SGE.